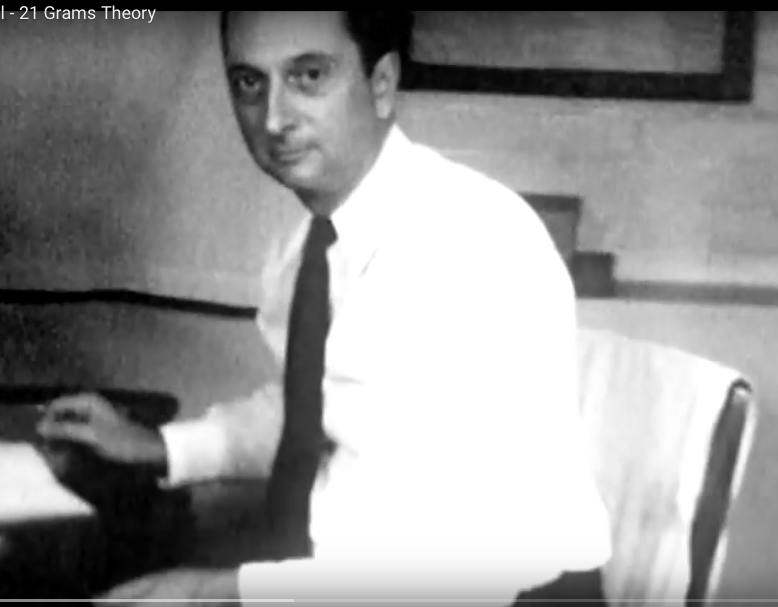 In 1907, a Massachusetts doctor named Duncan MacDougall performed an unusual series of experiments. Intrigued by the idea that the human soul had mass, and could therefore be weighed, Dr. MacDougall put together a bed fitted with a sensitive set of beam scales, and convinced a series of terminally ill patients to lie on it during the final moments of their lives.

MacDougall was nothing if not detail-oriented: He did was identify six patients at different nursing homes whose death was inevitable. While choosing these six patients, he made sure that he chooses the ones who suffered from physical exhaustion, so they would remain still during the experiment.

Out of the six chosen ones, four suffered from tuberculosis, one from diabetes and another one whose condition was unknown. Five were men and one was a woman. The beds of these six patients were placed on a huge scale to accurately measure their weight when they were alive and when they were dead. This scale was sensitive with two-tenths of an ounce.

When they all died, one patient lost 21.3gms of weight at the time of death. Others, too lost weight but one put it back on and one lost even more weight after a while. MacDougall disregarded the findings of all the other patients on the grounds that there was an error in adjusting the scales.

A Year in the Spotlight

The results of MacDougall’s study appeared in The New York Times in March 1907. The article set off a debate between MacDougall and the physician Augustus P. Clarke, who “had a field day” with MacDougall’s minuscule measurement techniques.

Clarke pointed out that at the moment of death, the lungs stop cooling the blood, causing the body’s temperature to rise slightly, which makes the skin sweat — accounting for Dr. MacDougall’s missing 21 grams. MacDougall fired back in the next issue, arguing that circulation ceases at the moment of death, so the skin wouldn’t be heated by the rise in temperature. The debate ran all the way to the end of 1907, picking up supporters on both sides along the way.

For four years, all was quiet on the MacDougall front, but in 1911 he graced The New York Time’s front page with an announcement that he’d upped the ante. This time, he wouldn’t be weighing the human soul — he’d be photographing it at the moment it left the body.

Although he expressed concern that “the soul substance might become [too] agitated” to be photographed at the moment of death, he did manage to perform a dozen experiments in which he photographed “a light resembling that of the interstellar ether” in or around patients’ skulls at the moments they died.

MacDougall himself passed away into the interstellar ether in 1920, leaving behind a small band of ardent supporters, along with a far larger group of physicians who seemed incredulous that this farce had gone on so long. Members of the public settled down on one side or the other, and the discussion fell off the radar.

Except that it never really did — at least not completely.

A Legacy of Oddity

References to MacDougall’s experiments continue to spring forth in pop culture every few years, from the Victorian era right up to today. The idea that the soul weighs 21 grams has appeared in novels, songs, and movies — it’s even been the title of a film. Dan Brown described MacDougall’s experiments in some detail in his adventure yarn The Lost Symbol.

Mention the soul-weighing experiments to a person who’s into parapsychology, and you’ll likely hear a murmur of approval; after all, the idea of scientific proof for the soul offers comfort in much the same way that tarot readings and hotline spiritualists do. Even among more skeptical folks, it’s a topic that comes up now and then in late-night discussions: “Wasn’t there once a guy who tried to weigh the soul…?”

The experiments’ actual results, and their failure to achieve acceptance as scientific canon, are entirely beside the point. Science has gone one way, and pop culture another. Functional neuroimaging has tied every conceivable function once associated with the soul to specific regions and structures of the brain. Physics has mapped the linkages between subatomic particles so thoroughly that there’s simply no space left for spiritual forces.

Although MacDougall’s findings were heavily ridiculed, the idea that the human soul had weight was popularized and became the subject of a motion picture titled ’21 grams’. The idea was also explored in other forms of broadcasting and publication.

It is also said that MacDougall claimed that only humans had souls and animals did not. He repeated the same experiment with dogs.

Famous writer Dan Brown’s novel, ‘The Lost Symbol’ contains a chapter on the same subject, explaining some amazing experiments. Katherine Solomon who is one of the protagonists in the film successfully weighs the human soul in the book. The author writers, ‘Our soul is a material substance which can exist outside the body and can have weight.’

There was another researcher named, Lyell Watson from the University Of New York who conducted a similar experiment to weigh the human soul and found out that the subjects of his experiment became 2.5-6.5 grams lighter. Doctor of Science Eugenyus Kugis from the Institute of Semiconductors of the Lithuania Academy of Sciences in 2006, also achieved similar results.

There were other findings that a decrease in weight happened even during sleep. These findings were arrived at by Swiss scientists.

So does the soul have weight? Yes. How much? Science still has to get there.

We’re still profoundly ignorant today, as any honest scientist will tell you. Certain behaviors of quantum particles still baffle the brightest minds; and we’re still a long way from understanding exactly how our brains do most of what they do. We keep looking for the dark matter that constitutes more than 80 percent of the universe’s mass, but we haven’t actually seen a single atom of it or know where, exactly, it is.

But in 1907, as today, the real, testable, verifiable universe continually proves to be much stranger than anything parapsychology can dream up. How are photons both particles and waves and yet somehow neither? How can there be so many planets in our galaxy, yet so few that harbor life — we think — as we know it? The universe is full of real unsolved mysteries, whose real answers are out there somewhere.

Statement from myself to you, the readers

As for me, I have seen many “ghosts” and strange things that have compelled me to create the site afterdarkclub.com and to blog about the subjects that I do. I do all this on my own time and with my own expenses to share the experiences. I enjoy hearing from the readers of the blog or those who contact me through the email link on the afterdarkclub.com site. I completely understand that there is a energetic source that is inside of our physical bodies. As always, life proves stranger than fiction.