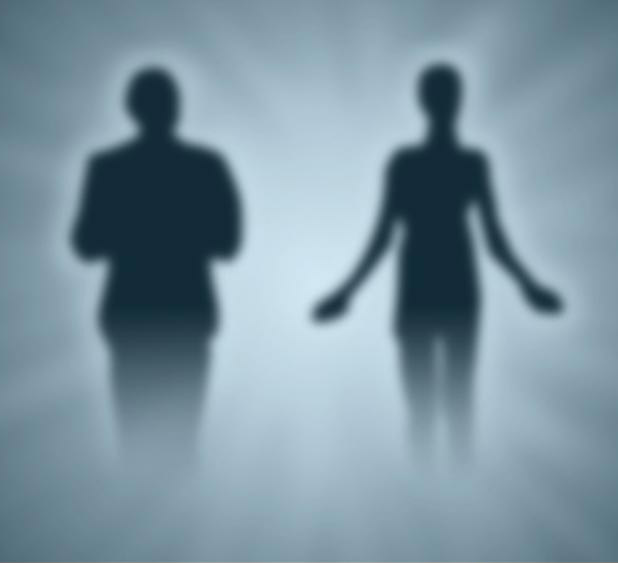 You would be amazed at how much the deceased want to communicate back to those that they loved, especially the first few months after they have departed. You may be getting contacted right now from someone you love and are not aware of it.
Often a person’s grief can stop the flow of communication from the departed. It is natural to grieve for someone you have lost, but you have to get calm and quiet to start receiving messages and even answers to your questions. When you are able to put aside your grief for short periods of time, you will be able to notice if you are being contacted.

Start paying attention to your environment and expressions that come into your mind that remind you of your loved one. Let me explain this further.
The deceased often communicate by turning on lights, electronics, manipulating computers, and any other electronic device. The reason is that they, departed loved ones are spirits, which are pure energy and it is easy for them to come through energy devices. If you have noticed unusual things happening around your electronics, this could be your loved one letting you know that they are with you. Perhaps you were looking for something on the internet and became distracted, and, when you looked back at the monitor, there on the screen is exactly a website that would help you. These things are not coincidental; this is one of the ways that the deceased have of letting you know they are there with you. They may also move curtains or even your sheets to get your attention.

Everyday and evening I speak out to my son Jeremy, My friend Joe Whitmoyer, and my parents. I have walked through my house from one room to another only to find that things from one room seemed to appear in another. I have used my phone as I communicate and have captured colored orbs, shifting light forms, and have had the light on the phone flash on and off like a strobe. It even turns itself off from time to time.

You can develop the gift of communicating with the departed. I am here to demystify the belief that only a select person or group is able to have this talent. Each one of us possesses psychic abilities, and its learning to use them that will help us pierce the veil between our world and the spirit world. Do not use anything that will alter you such as drugs, alcohol, any type of stimulant. You want to be in your own totality as not you have anything just make you halustinate.
Start thinking about things that have been happening around you; as I said earlier, keep a journal and make notations of things you notice or have heard.
Open your spiritual self and you will be amazed at what you truly hear and see.

The 12 Types of After Death Communications

The term ‘After Death Communication’ that we use to describe types of non-assisted communication from the deceased was coined by Bill and Judy Guggenheim in preparation for their book, Hello from Heaven: A New Field of Research – After Death Communication Confirms that Life and Love are Eternal. Although they weren’t the first researchers in this field, their book brought ADCs into the public consciousness much the same way Raymond Moody’s book “Life after Life” did for Near-Death Experiences. In it, they define twelve ways their survey participants were contacted by their dearly departed:

1. Kinesthetic – Sensing a presence
2. Auditory – Hearing a voice, either with your physical ears in or your head (mentally)
3. Tactile – Feeling touched physically, like a hug, caress, kiss on the cheek
4. Olfactory – Smelling a fragrance or odor connected to the deceased (perfume, cigar smell, etc)
5. Visual – Seeing a full or partial appearance of the deceased; either an outline, transparent, just a part of the body, or full flesh-and-blood
6. Visionary – A mental vision of the deceased with complete clarity while awake (either with eyes open or shut)
7. Hypnogogic – Appearance of the deceased while falling asleep or just waking up (either physically, in the room, or mentally)
8. Somnolent – An appearance of the deceased in a ultra-vivid and logical dream; ordered and atypical for most dreams.
9. Out-of-Body – Meeting a deceased person while having an out-of-body experience.
10. Technological – Receiving a phone call from the deceased, text-message, email or through a device, such as hearing their voice through radio static.
11. Material – Physical phenomena that occurs such as lights turning on and off, items moving, music playing without being turned on. Usually in a way that reminds you of the deceased.
12. Symbolic – Seeing a symbol that reminds you of the deceased; a license plate, hearing a song, seeing their name or an animal (most commonly butterflies) that reminds you of them.

After Death Communications are far more common than near-death experiences in the general population, even though the latter are arguably more well-known. A study done by Jenny Streit-Horn, a doctoral student under Dr. Jan Holder, revealed that 30-35% of people can expect to have an after-death communication in their lifetimes. Within the first year of bereavement, a person is 75% likely to experience an ADC, although a first ADCs can happen as long as several decades after the death occurred.

Grief and type of relationship also seem to influence the prevalence of ADCs. People who lost spouses tended to have a greater number of ADCs than parental, sibling or friendship relationships. People who are actively in the grieving process also reported more ADCs than people who described themselves as past the grieving process, though both groups reported high numbers of ADCs regardless. Anecdotally, people in the first stages of grief or pathological grief tend not to have ADCs until their grief has lessened somewhat. Aside from Crisis Apparitions (paranormal visions or visitations that notify loved ones of a person’s death), it would seem that intense emotions can ‘wall off’ a person from receiving paranormal visitations.

From the study, the following statements about After-Death Communications were found to be true:
• Bereaved people more than non-bereaved have ADCs; about ¾ of people within one year of the death of a loved one.
• Widows and widowers especially.
• Women more than men
• People of all ages, with older people perhaps slightly more likely, probably because the older a person is, the more likely the person has experienced others’ deaths.
• People of all nationalities, with those from ADC-affirming cultures reporting more.
• People of all ethnicities, with some perhaps slightly more than others – from highest to lowest among Americans: African-American, Mexican-American, Caucasian-American, and Japanese-American.
• People of all education levels.
• People of all incomes, with people with relatively lower incomes perhaps slightly more likely.
• People of all religious affiliations and practices.
• People no matter what their physical condition.
• People no matter what their mental condition.
• The great majority of ADC researchers have noted that ADCrs in their studies were mentally healthy. There is no evidence that ADC alone indicates psychological disorder or mental illness.
ADCs are under-reported. In the study, 54% of the participants had never told another person prior to the survey. Many participants admitted to fear of ridicule as the reason for their reluctance to share their experience. It is probable that an even higher percentage of people likely have an ADC than is currently reported, possibly making this one of the most commonly experienced spiritual occurrence that is studied by paranormal and afterlife researchers.

When it comes to any type of paranormal activity involving personal experiences, skeptics can only usually point to one of four explanations.

1. Deception – skeptics might suggest that a grieving person who has received a lot of attention right after a death might invent such stories to gain back that attention once everyone returns to their lives and the grieving become very lonely. In this case, since the majority of people surveyed didn’t tell another person about their experience, deception might be difficult to use as an explanation for most ADCs, though in rare cases, it’s always possible.
2. Hallucination – grief is an extreme psychological state. Some scientists and psychologists believe that our brains will invent such hallucinations in response to grief, although there have been no scientific studies on this topic. ADCs are also prevalent in people who aren’t actively grieving.
3. Pareidolia or Misidentification – Humans are great at pattern recognition. Just like the ability to look at a cloud and see an elephant, humans can look at an event and draw personal conclusions from it that may not really fit or simply be coincidental. In truth, ADCs are subjective. What constitutes a sign for you, may be considered a coincidence to another person.
4. Drugs or Alcohol – Often times, a grieving person is offered a sedative in order to help them get through the first few days and the funeral. In many cases, this is a likely to be a benzodiazepine such as Xanax or Valium. In other cases, a person may self-medicate with alcohol, opiates, marijuana and the like. When drugs or alcohol are involved, a person’s perceptions are altered and they might be more likely to imagine or hallucinate an ADC.
Although the four reasons above might explain some ADCs, it’s hard to explain away all ADCs this way. If 60 million Americans are likely to have an ADC in their lifetime, is it possible that all of them will be lying, spontaneously hallucinating or on drugs? How can we then explain ADCs that occur well after the initial grief has dissipated?

Normal, well-adjusted healthy individuals are not prone to suddenly hallucinate, nor would most of these people have the incentive to lie, especially to an anonymous survey. Although its possible that some people may misidentify or use drugs, the sheer number of ADCs reported makes the probability that all ADCs are false very low overall.

Know who you’re looking for !

Always, and I repeat, always be careful when learning how to communicate with the dead. Yes, it’s interesting and yes, it can be a comfort to your hurting soul, but reaching out can also attract energies and spirits that are not easy to rid yourself of. Just as there are good and bad alive people, there are good and bad deceased people too. Remember, we’re really not familiar with the landscape of the spirit world unless we have personally seen the other side through dying and returning.
I encourage you to have an open mind and keep learning.